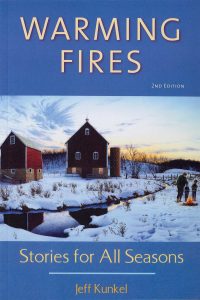 Warming Fires – Stories for All Seasons

We need stories like these to help us make sense out of our lives….

Kunkel tells the stories of these Wisconsin folk with a gentle good humor reminiscent of his fellow storyteller from Minnesota, Garrison Keillor.”

Warming Fires is a collection of short stories with a vivid sense of place and memorable characters.  Each story is carried by a distinct voice and unfolds with humor, action, feeling, and surprise.  The characters – farmers, ministers, industrialists, teachers, hunters, newlyweds, children – even animals – get into trouble, and this trouble creates an opening for fear or faith, awareness or action, both in the character and the reader.  God, often unnamed,  moves through these stories in a free and unpredictable way…I  hope these stories become “warming fires” for you, lighting up the night, crackling, flaring, glowing, shooting sparks, warming flesh and blood.”

Jeff Kunkel, from the Preface of Warming Fires