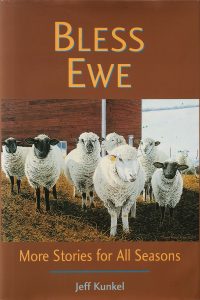 Kunkel’s stories are rooted in the farms, villages, churches, and outdoor life of Wisconsin with characters and predicaments which could easily be yours… Kunkel does not shield the reader from the hardness of life but often reveals a bit of grace in the commonplace events of a card game or whitecaps slapping the side of a boat.

Beginning of the story, Good Morning, Mr. and Mrs. America and All the Ships at Sea

from Bless Ewe – More Stories for All Seasons