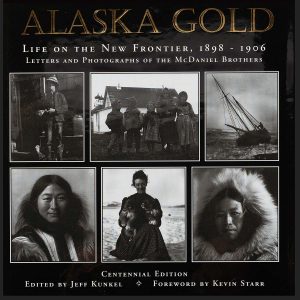 Letters and Photographs of the McDaniel Brothers
edited by Jeff Kunkel

Here are the facts, sights, sounds, smells and engaging detail of this Far North frontier. Here is an epic, as experienced and expressed by Californians through letters and photographs, tools available to men and women of ordinary means a century ago. The McDaniel did not set forth in search of art.  They wanted gold.  But the art came, nevertheless, and in this volume, some fifty years after their deaths and over a hundred years after their great adventure, they truly strike it rich.

from the author, editor, Jeff Kunkel

This book has it all – a remarkable collaboration between brothers,   tumultuous sea journeys from San Francisco to Nome, Alaska, and across the Bering Strait to Siberia; staking a mining claim on the Nome beach; living off the land, hardship, and injury; striking it “nearly” rich;  frontier justice; friendships with Native neighbors, fierce Arctic winters,  tundra courtship and marriage – all revealed through personal letters and photographs.

Small beginnings may take us, we know not where..

This project began when a friend of mine, Wilfred McDaniel Jr., invited me to come to his California home and see his Dad’s “Alaska stuff.”  When I got to his home,  the dining room table was piled high with  cardboard boxes full of  photographs, negatives, articles,  letters, and mining and native artifacts from his father’s six seasons of mining for gold in Nome, Alaska, over a hundred years earlier. After looking through the collection for several hours, I said, “Mac, this is a world-class collection. It has to be shared.”  He replied, “Ok. Help me do that.”  And that began a long collaboration with Mac and many from his family which led to friendships in  Alaska along with this book and traveling museum exhibition. The McDaniel Collection was donated to the Carrie McLain Museum in Nome, Alaska.   Jeff Kunkel,